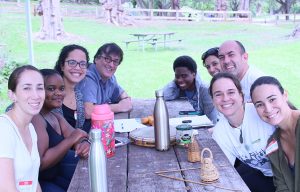 On October 28th Prof. Marcio Mr.M, Dr Karen Galea and Inst. Rebelde led a discussion about the historical and contemporary connections of Capoeira and society.

Capoeira in Praxis: Weaving the Transformative Thread of Empowerment into Communities and Societies

Capoeira is a Brazilian martial arts with an underlying philosophy of nonphysical contact, community and teamwork (Burt & Butler, 2011). Created by African slaves as a form of resistance, capoeira has historical roots in repression, institutionalism, and issues of social class. Capoeira can be paralleled with Paulo Freire’s (2001) theory of liberation education where literacy is not a technical skill but a necessary tool to write and read one’s own reality and eventual liberation. Likewise, capoeira is not a technical form of self-defense, but an opportunity for communities to learn and practice the power of liberation from personal and environmental oppression. While limited empirical research exists on the transformative impact of capoeira as a psychosocial intervention, the potential for capoeira to empower communities is profound. Facilitated discussions examine the effects of capoeira within three marginalized groups and its potential as a psychosocial intervention. A participatory capoeira session will take place. 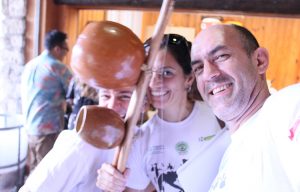 Capoeira as a psychosocial intervention for marginalized communities and the need for empirical research. Karen Galea received her PhD in Community Psychology in June 2017 from National Louis University in Chicago, IL. While studying at National Louis University, Karen wrote and led discussions within her cohort on the psychosocial opportunity capoeira presents to engage communities in collaborative, physical activity that is good for the mind and spirit of both the individual participant, but community as well. Burt and Butler (2001) opine that capoeira may serve as a pragmatic martial arts/clinical model that promotes cultural sensitivity for marginalized youth, collective action in performance, self-efficacy in individual youth, and positive capabilities. Capoeira celebrates diversity of the collective by combining physical activity, music, and rhythm within the context of positive interaction among people, positive role modeling, diversity and cultural awareness. No other martial arts form combines what is referred to as reciprocal determinism (Bandrua, 1986) where the tridactic interaction of behavior, environment and interpersonal aspects merge in continuous, synchronous movement. Where literacy is Freire’s tool to liberate the mind, could capoeira be the tool to liberate society from intolerance and distrust in one another? Do we need such a tool? Two scholarly articles will be presented, shared and discussed on capoeira in praxis.

Capoeira in Praxis: Working in communities of adults with intellectual disabilities. Marcio Gomes, or Professor Mr. M – a nickname he received because of his stance which resembles the American Illusionist the “Masked Magician”, has been practicing capoeira for more than 30 years. Originally from Porto Alegre, Brazil, Professor Mr. M currently practices in Boca Raton and surrounding Southeast Florida communities. Professor Mr. M will discuss the transformative process capoeira has on adults with intellectual disabilities through Capoeira para Crescer or Capoeira to Grow, a group he founded in 2007 in Porto Alegre, Brazil. Professor Mr. M. will discuss capoeira in praxis as a psychosocial intervention and the effects on his students with intellectual disabilities. He attributes the transformation in his students to the core philosophies of inclusiveness, teamwork and community. Professor Mr. M is part of Esporte Nacional Capoeira based in Porto Alegre, Brazil and he leads the Esporte Nacional Capoeira in the United States. Participants will be invited to ask questions, reflect and discuss his experiences and observations.

Capoeira in Praxis: Working in communities of youth in Khayelisha, South Africa and Little Haiti. Nicole Madalozzo, or Instructor Rebelde (pronounced “hey-belge-ee” which means “rebel” in Portuguese) has been practicing capoeira for over 15 years. A native of Venezuela, Instructor Rebelde will discuss her work with youth in Khayelisha, South Africa from 2010 to 2012 and her current work in Little Haiti, Miami. Kahayelisha is a township of Cape Town established in the 1980s which was originally planned as a community for 200,000 Black Africans. Today, Khayelitsha has a population of over 1 million and 50% of residents are under the age of 19; 47% are unemployed and; on average, four murders take place daily (Wainright, 2014). Domestically, Instructor Rebelde works with the youth of the Little Haiti Cultural Center. Here, she provides after school programming and runs a summer camp. Instructor Rebelde will discuss capoeira in praxis as a psychosocial intervention with her young students in both the South African and Miami communities. She will recount the empowerment she has witnessed in her students and their burgeoning responsibility to create positive change in their communities as the result of capoeira. Instructor Rebelede is a member of Cordao de Ouro based in Sao Paulo, Brazil. She leads Cordao de Ouro in Miami. Participants will be invited to ask questions, reflect and discuss her experiences and observations. 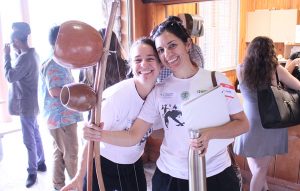