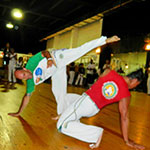 One of the biggest assets a capoeirista has is the ability to dodge and move around like a boxer who “bobs and weaves” to side-step the hit. The Ginga (rocking back and forth; to swing) is the fundamental triangular footwork of Capoeira and an important part of the arsenal. It keeps you in constant motion. A goal in Capoeira is to escape movements, not to block them. You learn to dodge incomings attack (whether it be a punch, kick, tackle, etc.). Capoeiristas pride themselves on trickery and being unpredictable, qualities that would help in any fight both physically and mentally!